ISLAMABAD: The federal government on Thursday increased the price of petrol by Rs4 per litre for the first fortnight of October, effective from Friday, according to a notification issued by the Finance Ministry.

The government approved Rs4 per litre increase on petrol and Rs2 per litre in the price of diesel.

The price of kerosene oil went up by Rs7.05 while the rate of light diesel was jacked up to Rs8.82 per litre. 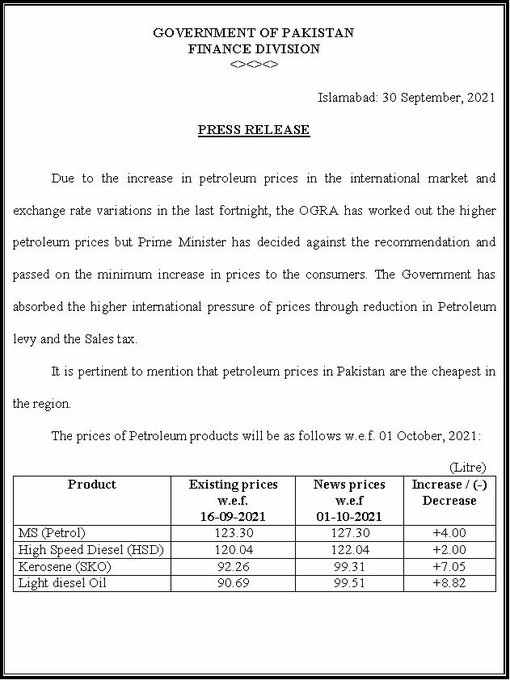 The new prices will come into effect from 12:00 midnight.

The Oil and Gas Regulatory Authority (Ogra) had sent a summary to the petroleum division seeking an increase in petrol price by Rs5.25 per litre. The diesel price was recommended to be raised by Rs3.5 per litre.

The federal government had increased the price of petrol by Rs5 per litre on September 15.

The government had approved Rs5 per litre increase on petrol and Rs5.01 per litre in the price of diese

The post Govt jacks up petrol price by Rs4 per litre appeared first on ARY NEWS.